You’ve reached my OLD WEBSITE. For an updated version of my bio (and more news about my novels and events), please go to: https://stephaniestorey.com/about

Stephanie Storey’s debut novel Oil and Marble is a Los Angeles Times bestseller, was named one of Hudson Booksellers’ Best Books of 2016, and was called “extraordinarily entertaining” by The New York Times. She has a degree in Fine Arts from Vanderbilt University and attended a PhD program in Art History—before leaving to get her MFA in Creative Writing from Emerson College. She has studied art in Italy and been on a pilgrimage to see every Michelangelo on display in Europe. She has also been a television producer for over 15 years in Los Angeles for shows like Alec Baldwin on ABC, The Arsenio Hall Show for CBS, and The Writers’ Room for Sundance Channel. When not writing novels or producing television, she can usually be found — with her husband, an actor and Emmy-winning comedy writer — traveling the world in search of her next story.

“When Stephanie Storey speaks, her generosity fills the room.”

“The crowd was enraptured by Stephanie’s storytelling.”

“She gave attendees the courage and inspiration to commit to their dream projects and tackle inevitable challenges.” 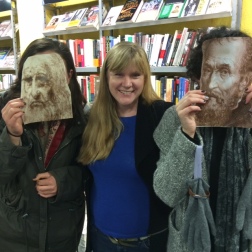 “Stephanie Storey easily distinguished herself as one of the best speakers that the Springfield Art Museum has hosted in recent memory. She took the time to ask questions about our groups’ particular interests, understand the Museum’s collection, and to consider what format would be most engaging. She didn’t just present her ideas and research, she created a dialogue with the audience. Like a viewer of Michelangelo’s Pietà, the crowd was enraptured by Stephanie’s storytelling.” –Joshua Best, Development and Marketing Coordinator for the Springfield Art Museum 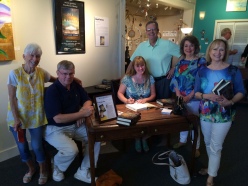 “Stephanie Storey’s expertise brought my writing to the next level. Her understanding of what motivates readers, as evidenced in her own work, makes the difference between an abandoned novel and a beloved one. Stephanie’s funny anecdotes and warm heart kept the powerful information at manageable levels. This is not your average writing class. It’s one to write home about.” – Kathryn Culpepper, The Writing Barn, attendee/student

When Stephanie Storey speaks, her generosity fills the room. Stephanie’s talent for inspiring new writers to action transformed our casual open mic into a salon of heartfelt encouragement and wise advice. Her approachable style, mentorship, and excellent Q&A responses made a professional contribution beyond expectation.  I have already recommended Stephanie Storey to other organizations as both an artist and a speaker. – Jennifer Dorner, Writing Fellow, Attic Institute, Portland, Oregon

“Stephanie sparkles!  Her talks about Leonardo and Michelangelo combine solidly researched information and imagination, presented with engaging style.  She paints a vivid picture of the rivalry of these two great Renaissance giants–equals in genius, opposites in personality–working almost elbow to elbow in Florence for several years.” – Carolyn Watson, Art History Professor at Furman University in Greenville, South Carolina

“Stephanie Storey engages everyone in the room in her creative journey. She weaves her magic while imparting craft tips which are helpful to all writers. She presented one of the best workshops we have offered in recent months.” – Susan Williamson, Program Chair for the Winston-Salem Writers’ Workshop

The Asheville Art Museum enjoyed hosting Stephanie on her book tour for Oil and Marble! Although we don’t collect Italian Renaissance art, Stephanie tailored her discussion of the novel to include material on how Leonardo’s and Michelangelo’s masterpieces relate to our collection focus: 20th- and 21st-century American art with concentration on the arts of Southern Appalachia and Western North Carolina. No small feat, but she made it seem effortless and like the most natural thing in the world! Stephanie brings great energy and passion to her presentations, and her love for the subject matter is quite contagious. –Kristi McMillan, Adult Programs Manager at the Asheville Art Museum

“Author Stephanie Storey captivated the attention of her audience of around sixty Heber Springs residents keeping them spellbound as she spoke about her debut historical novel, Oil and Marble… Her enthusiasm, quick-wit, energy and intelligence quickly captured everyone’s attention and left the group feeling a part of her creative process… Stephanie’s passionate and animated presentation brought to life the historical important of these important works of art and the drama between these two masters as they created them. Stephanie encouraged each person to keep developing their own creative endeavors.” –Marilyn Wright, The Sun-Times, Heber Springs, Arkansas 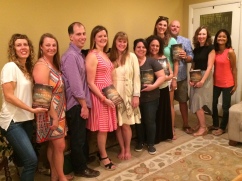 “Stephanie Storey is a vibrant and engaging teaching artistwhose presentation strikes the perfect balance between author’s talk and instructional lecture—she opened a window into her own writing world for Writing Barn attendees while giving them practical tools for improving their process. Most importantly, she gave writers the courage and inspiration to commit to their dream projectsand tackle the inevitable challenges that come with writing and editing a book. Stephanie’s unique perspective as a producer enables her to speak candidly about making bold edits and brave character choices while staying true to the author’s voice.” – Claire Campbell, Program Manager at the Writing Barn

“She is a fascinating individual whose passion is stimulating even for those of us without an artistic state of mind.” – Steve Vassallo, HoddyToddy.com

“Stephanie Storey gave an enthused and interesting presentation to my English class with a focus on her novel and the process of writing.  Students were most positive in their feedback, and Ms. Storey’s story was both fun and inspirational.  A nice yet relevant break in the daily curriculum.” – T.G. Fink binder, APEX English teacher at Walter Johnson High School in Bethesda, MD

“At our conference, Stephanie stood out as being one of our most engaging and inspiring presenters. All of the feedback we heard was incredibly positive, speaking not only to her engaging presentation style but also to the high quality of her workshop content. More than one experienced writer told me they learned new things and had “ah ha!” moments during her workshops that impacted and improved their craft. She’s an outstanding teacher and speaker.” Jenny Ballif, Las Vegas Writing Conference