On Revisiting the Last Supper 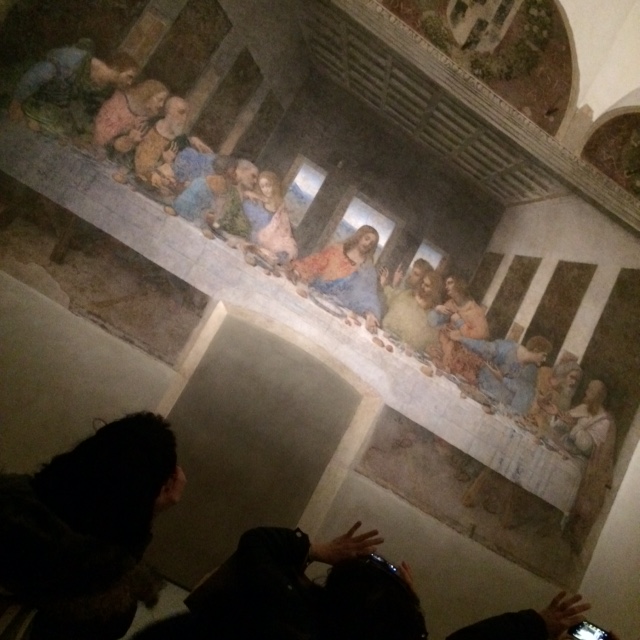 I haven’t posted in a couple of weeks. It’s not because I haven’t had things to say — we’ve been traveling through Europe, so I have several blogs in my draft queue waiting to be published…

I wrote THIS post weeks ago, the evening after revisiting The Last Supper while in Milan, but I haven’t been able to put it up. I needed to let it settle…

I don’t know if I would’ve visited The Last Supper again if it weren’t for my husband. We’re in Milan, so it makes sense to go, but I’ve already seen the painting. Plus, it’s not like a regular museum where you can walk up, buy a ticket, see the art, and then grab lunch. You have to buy tickets in advance, you can only visit during your designated 15 minute window, and you have to enter through this clinical series of air-locked doors…

The first time I visited — over 20 years ago — the painting felt distant. I’d studied it for so may hours in a dark art history classroom that I didn’t know how to connect with the thing itself. The second time, I focused on studying every last detail in the few minutes I was allowed in the room. I needed to see everything! This time, I thought I would just shrug at seeing it. Been there, done that…

But my husband had never seen it before, and he was very excited about going, so I decided to join him.

We arrived at Santa Maria delle Grazie 10 minutes early (as directed by our tickets) and waited with the other 20 or so other people with our same time slot. We read the timeline on the wall, explaining the history of the painting. The Last Supper has survived so much. Leonardo used an experimental technique that caused the painting to start falling off the wall almost as soon as it was completed. During Napoleon’s time, the refectory was used as military barracks and stables for horses; the soldiers threw horse dung at the painting when they got bored. The Nazi’s bombed the church during World War II; other walls were destroyed, but The Last Supper wall — miraculously — remained standing.  For several years after the war, it was an “open-air painting” before new walls were built around it… It’s a miracle that this fragile painting still exists at all.

Our appointed time arrived. We were herded through that series of air-locked doors. You wait in a chamber for doors to open. You all squeeze inside another chamber. The first doors close. A new series opens… it’s like getting into a high-security bank. (Only these doors aren’t an attempt to protect the painting from robbers, but from the elements). As we advanced, my husband became more and more chatty with nervous excitement…

We entered the room.

The painting has been restored many times; it doesn’t look as ghost-like as the first time I saw it. The colors are brighter; the lines are sharper. Who knows how many of Leonardo’s brushstrokes remain (as opposed to those of the restorers), but that didn’t stop an overwhelming wave of emotion from crashing down around me.

For in that painting are the opening lines of my debut novel, Oil and Marble: Leonardo, standing in front of The Last Supper, knowing his paint is already flaking off the wall… This is the place where my novel begins.

And I felt Leonardo — still there — standing in front of his painting, looking at me.

Since writing Oil and Marble, I’ve been nervous about facing Leonardo and Michelangelo again. I’d trespassed on their stories. I’d broken into their studios and minds. Did I invade too much? Did I tell their stories well? Are they proud of what I did or embarrassed? They’re both geniuses who changed the world, and I’m just me. I am, after all, a woman living in 21st century America. How DARE I tell the stories of two Cinquecento Italian MALE artists?

Look, I gave myself permission to tell their story a long time ago. I’m as much of an inheritor of their art as anyone, and I’ve always felt a particular connection to them… When I started this journey, I asked Leonardo and Michelangelo to join me, and they did. In my head, at least.

But facing Leonardo again terrified me. Would he hate me for what I’d done?

I looked up at the painting. Leonardo had captured the moment right after Jesus proclaimed, “One of you will betray me!” It’s an undulating mass of human emotion. The apostles gesture, exclaim, who is it? Is it him, or him, or maybe me. This year, I’ve felt that same confusion, wondering what was going on with my life, where I will end up, how the story will end…

But then I felt Leonardo smile and laugh. He reassured me that it was okay that I had invaded his life. I let you in, he whispered. I told you my story. You did the right thing.

I exhaled the deepest gratitude I’ve ever felt, and I said thank you, Leonardo, for letting me into your story, telling me your fears, letting me watch as you study, draw, paint… He was there with me, in front of his painting, in that sacred space, behind those air-locked doors. It was as though he’d been waiting there for me all along.

We didn’t go to Florence on this trip. I can’t face the David again. Not yet.

Teaser for upcoming blog posts: While in Paris, at the Louvre, I did visit Michelangelo’s slaves again. And I came face to face with Lisa. Stay tuned for when I’m finally ready to publish my feelings about THAT.

History Behind the Novel