Up Close with Renoir in Madrid

You’ve reached my OLD WEBSITE. For updates about my novels and other news, please visit my new website at https://stephaniestorey.com

The artwork must grab you, envelop you, transport you…

When I came to Spain, I expected to get up close and personal with Picasso, Goya, Dali, Velasquez, El Greco… But I did not expect to have a personal encounter with French master, Pierre-Auguste Renoir.

Then, I went to the Renoir: Intimacy exhibit at El Museo de arte Thyssen-Bornemisza.

When I was a kid, I hung posters of Renoir’s work on my walls as if he were some pop star, and I’d torn his pictures from the pages of a teeny-bop magazine. The people hanging out Renoir’s paintings were so beautiful, colorful, bright and… happy. I imagined the artist’s job to be the greatest job on the planet: capturing joy. 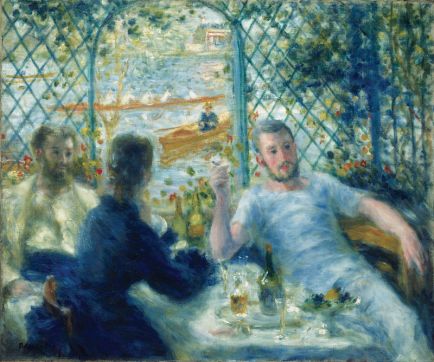 I came to Madrid because my art historical novel, Oil and Marble: a novel of Leonardo and Michelangelo, was translated into Spanish (as Leonardo y Miguel Angel), and I’m having a book event here in town at Libreria Le. One of my goals in writing Oil and Marble was to make my two protagonists HUMAN. I consider it my mission in life to take all artists off their pedestals and reveal them as real, struggling people.

And yet, Renoir — perhaps because of that childhood adoration — has always escaped my grasp. No matter how much I read about him or study his art, I still feel distant, like I can’t quite get to know the real man behind all of those beautiful paintings.

But in Madrid, I finally discovered the man.

The Renoir: Intimacy exhibit set out to go beyond the “purely visual” aspects of the Impressionists and introduce visitors to the “central role of tactile sensations” in Renoir’s art. It shows not only the importance of sight on Renoir’s work, but also the effect of smell, taste, sound and especially touch.

Renoir once told his son Jean to make sure and “protect the ends of your fingers: if you expose them, you may ruin your sense of touch and deprive yourself of a great deal of pleasure in life.” That’s a strange quote, isn’t it? A painter imploring his son to take care of the tips of his fingers… My parents taught me a lot of things, but they did not beg me to take care of my sense of touch.

This focus on the five senses certainly makes Renoir more real. We, as humans, experience  the world through our senses, so seeing Renoir’s work through the lens of his senses helped bring him to life for me.

But there was also something more.

In every room of the exhibit, I felt Renoir around me. The young man who brazenly embraced a new kind of art no matter the consequences and risked everything to put his heart into every stroke. The aging man who became incandescently famous during his lifetime and struggled with that fame, but continued to paint anyway. The lover of Lise, friend of Claude, father of Jean…

These faces brought him to life for me. Lise, the woman who would break his heart by marrying another. His friend Monet with whom he shared so much of his life: from the early years when they split a single can of beans for dinner so they could afford to buy more paint, to the late years when they were both navigating the highlights and pitfalls of fame. And then, his son Jean, who would one day grow into a great artist himself as a filmmaker. I imagine father Renoir worrying about how to pass on artistic wisdom to a growing creative boy.

It was in these relationships where I finally felt Renoir’s humanity. When I was a kid, I loved Renoir for his spirited, bright depictions of life in Paris. Now, thanks to this exhibit, I love him for something more: his heart.

2 thoughts on “Up Close with Renoir in Madrid”