Today, a new Leonardo da Vinci drawing was discovered in France (see featured image). To honor this very real discovery of very real history, here are 10 shockingly true stories from my historical novel, Oil and Marble: a novel of Leonardo and Michelangelo. I wrote lots of imagined bits — that’s why it’s fiction — but these historical facts may surprise you.

2: The Duccio Stone was botched and weathered. The stone that eventually became Michelangelo’s David really was botched by a sculptor by the name of Duccio. That gash really did exist (which Michelangelo had to carve around), and the stone really was stored outside in the Cathedral Workshop, battered by wind, rain and snow for nearly 40 years before Michelangelo got his hands on it.

3: Leonardo da Vinci and Niccolo Machiavelli both lived at Cesare Borgia’s Papal Army camp at the same time. While Leonardo was serving as Cesare Borgia’s military engineer, Niccolo Machiavelli was also at camp, serving as a Florentine diplomat trying to convince Borgia not to invade. Historians often comment, “If only we could’ve sat around the fire and listened to the conversation between these two geniuses…” Well, that’s the glory of fiction, right? 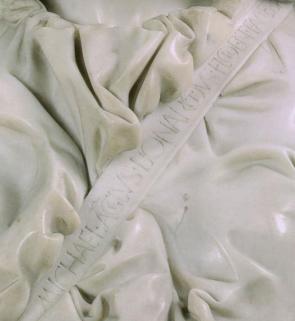 4: Michelangelo carved his name into the Pieta. Look closely at the marble strap across the Madonna’s chest on the Pieta. There is Michelangelo’s signature carved into the marble. And legend has it, he really did carve that name into the statue because credit for his masterpiece was going to a hunchback from Milan named Gobbo.

5: Leonardo da Vinci was charged with sodomy. In 1476, when Leonardo was twenty-four years old, someone anonymously accused him of sodomy alongside other Florentine men. Nothing ever came of the charges (and many artists of the day were rumored to be partaking in the practice,) but the punishment could have been death.

6: Michelangelo’s father beat him for wanting to become a sculptor. According to Vasari (the famous biographer who knew Michelangelo later in life) and the artist himself, his father and uncle both beat him when he was young for wanting to join the lowly craft of stonecutting, a profession far beneath the old Florentine family’s position.

7: Leonardo was illegitimate. Some claim Leonardo’s mother was a slave from the east in Leonardo’s father’s household. His mother, Caterina, was married off to another man, while his father married and sired eleven children. Leonardo’s father really did leave the artist out of his will, leaving his estate to his legitimate sons.

8: Michelangelo built a privacy shed around the stone to carve alone. Michelangelo famously became frustrated with people watching him work, so he built a work shed around David to prevent onlookers from spying on his progress.

9: Leonardo had a mischievous assistant whom he called Salai or “Little Devil.” Salai was a mainstay in Leonardo’s life. The artist’s notebooks are filled with references to Salai’s troublesome antics. Other studio assistants drew lewd pictures suggesting a certain relationship between master and assistant.

11: The Last Supper started falling off the wall during Leonardo’s lifetime. The Master from Vinci really did experiment with his fresco technique, hoping to use certain pigments and give himself more time to paint. And the paint really did start falling off almost immediately. Today, it’s a ghost of itself, but still worth a visit.

12: Leonardo da Vinci really did try to fly (at least once). Not only do we have drawings and designs of Leonardo’s flying machines, but he made a notation in his notebooks about plans to attempt a flight from Mont Ceceri, just north of Florence. He never left a follow-up note to record how it went… so I must assume it was not a success.

13: Both men studied anatomy by dissecting dead bodies. Both artists famously dissected the dead to study anatomy and left drawings of their findings. Michelangelo really did gift a carving of a crucifixion to thank Santo Spirito in Florence for letting him study in their mortuary. 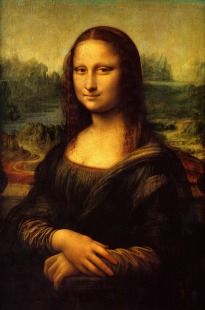 16: Michelangelo’s David faced the entry gates, as though protecting Florence from invasion. David really was a political symbol of the Florentine Republic in its day. And it really did face the city gates as though going to battle with anyone who dare invade.

17: Leonardo really did sketch Michelangelo’s David. And here is the reason for the entire novel. A simple sketch in one of Leonardo da Vinci’s notebooks. With this single image, I started wondering what would have made the 50 year old master sit at the foot of a young rival’s masterpiece to sketch it…

These are just a few of the true stories in Oil and Marble. Check out my recommended reading list to learn even more.

History Behind the Novel

11 thoughts on “Shockingly True Things in Oil and Marble”